Our School Over the Years

The Church of Our Lady and St. Hubert was opened in 1934 and the school took its first pupils on 5th April 1937. It consisted then of the hall and four classrooms; three further classrooms were added in the 1950s.

The playing field was enlarged and levelled in 1971 and, during the following two years, the hedge along the Wolverhampton Road was planted together with most of the shrubs and trees.

The number of children in the school has varied over the years. In 1937 there were 162 on roll and numbers rose steadily up to 1960, when there were 330; the opening of two other Catholic schools in the area relieved the pressure and there are now in the region of 213 children on roll. 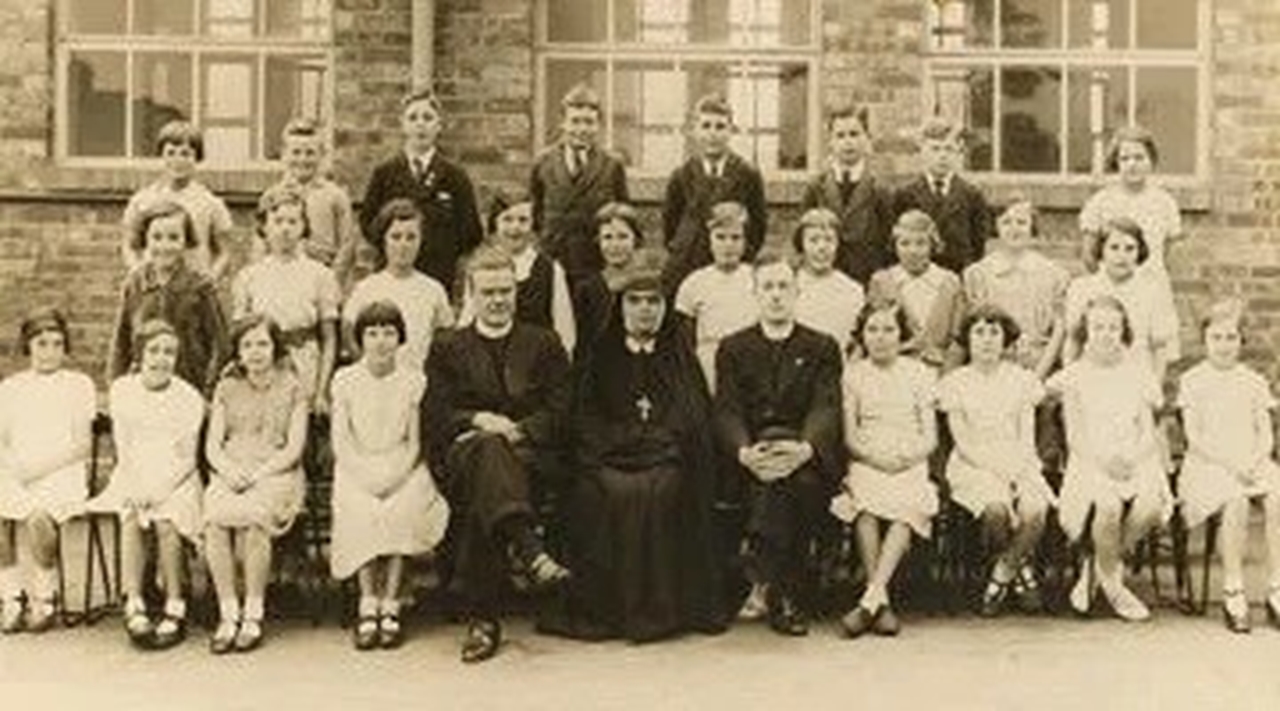 Here are some extracts from the early log books of the school.

St. Hubert's Junior School was opened for the admission of pupils today, the formal opening having taken place on Saturday 20th March. The children were assembled in St. Hubert's Church, where Holy Mass was celebrated by the manager, the Reverend D. Ford, at 9 a.m. After Mass, 161 children were admitted and divided into four classes - the youngest, aged 4 and 5, forming the Nursery class.

Miss Oakden, H.M.I. visited the school during the lunch hour. She expressed satisfaction with all that she saw, and made several suggestions regarding the social training of the children and the arrangement of timetables.

Timetable suspended. The morning was spent in Coronation celebrations. Members of the Education committee came to make a formal presentation of the Coronation souvenirs to the school.

School closed for teaching purposes owing to the outbreak of war which was announced yesterday.

School reopened today for children between the ages of 7 and 14. As our A.R.P. shelters are not yet made, we may not have more than 40 children in the building at once. Therefore we are teaching each class for one hour every day and giving one hour's homework. The whole school is given 30 minutes religious instruction in Church at 9.0'clock.

There has been a very heavy fall of snow during the weekend - and no children have come to school today. There is no heating as the coke, which was ordered ten days ago, has not yet been delivered.

Inspection of the children's respirators today,

Classes 1, II and III went to the Odeon Cinema in the afternoon to see a film of the Royal Wedding in Technicolor. 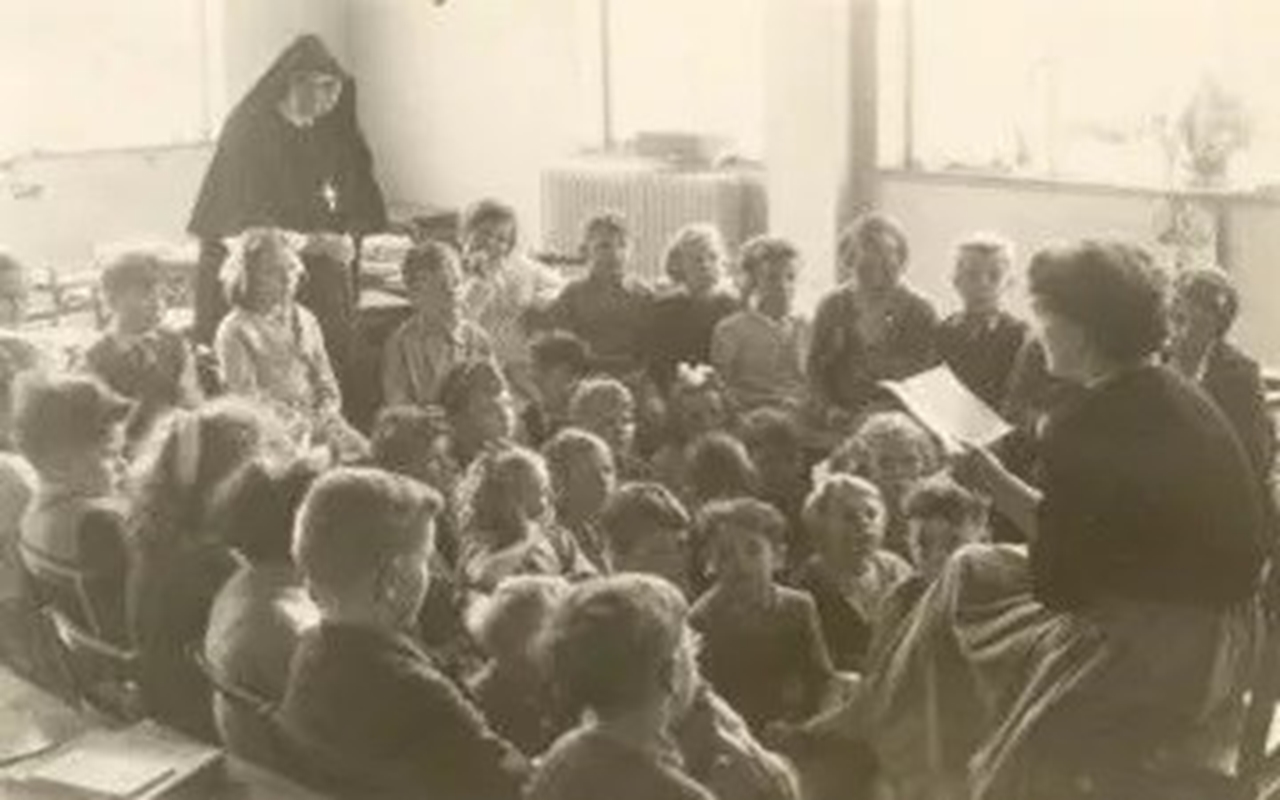 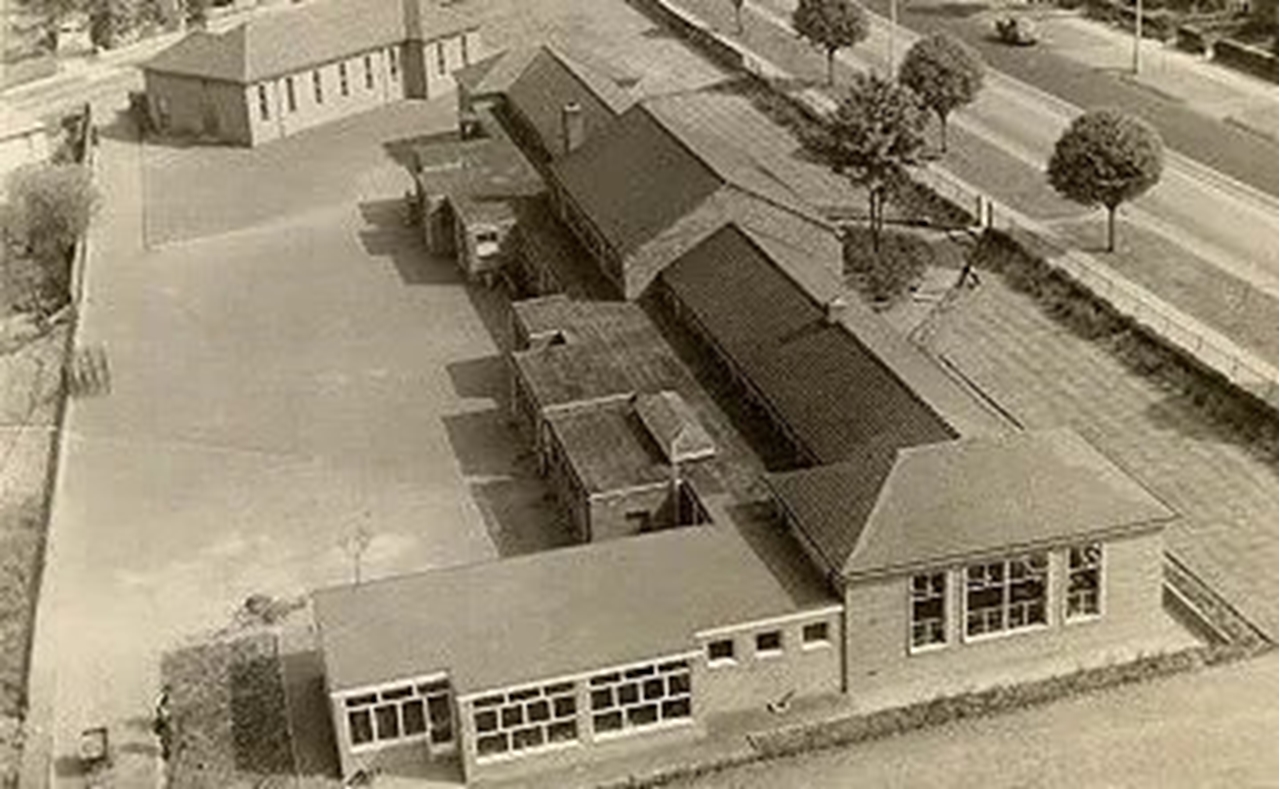 A Sporting Memory from the 1950s

I was at St Hubert’s from 1945 to 1951. We had no male teachers, so we sporting boys felt a bit neglected. However, my father (Austin Loughran) was head of Abbey Road School in Smethwick, and he was a cricketer (Dudley, Smethwick and Harborne) and footballer (Dudley Town), so he was our unofficial sports’ master.

I would go, with permission from Mother Mary Raymond, to local schools – namely Bleakhouse Road and Castle Hill to arrange football and cricket matches. We also played Abbey Road, but my father would select a team that would only moderately thrash us (trying to keep our football defeats within single figures!). We had no team kit, so played in our normal clothes and school shoes. I was the only one to have a football kit and boots.

The photo was taken by my father of our team v Abbey Road School at Lightwoods Park. On that day, we had only ten players, so we were lent one boy from Abbey Road to make up our 11.

We won only one match when I was playing. Much to the shock of Mr Addey (Bleakhouse Road), we beat his school 1-2 (away from home – we had no pitch for home matches), and I scored one of the goals. This was too much for Mr Addey, so we were challenged to play again the very next day. He lent us his team’s spare kit, but this was such a shock to us we lost 1-0.
With best wishes, Robert Loughran, Warners Bay, Australia. 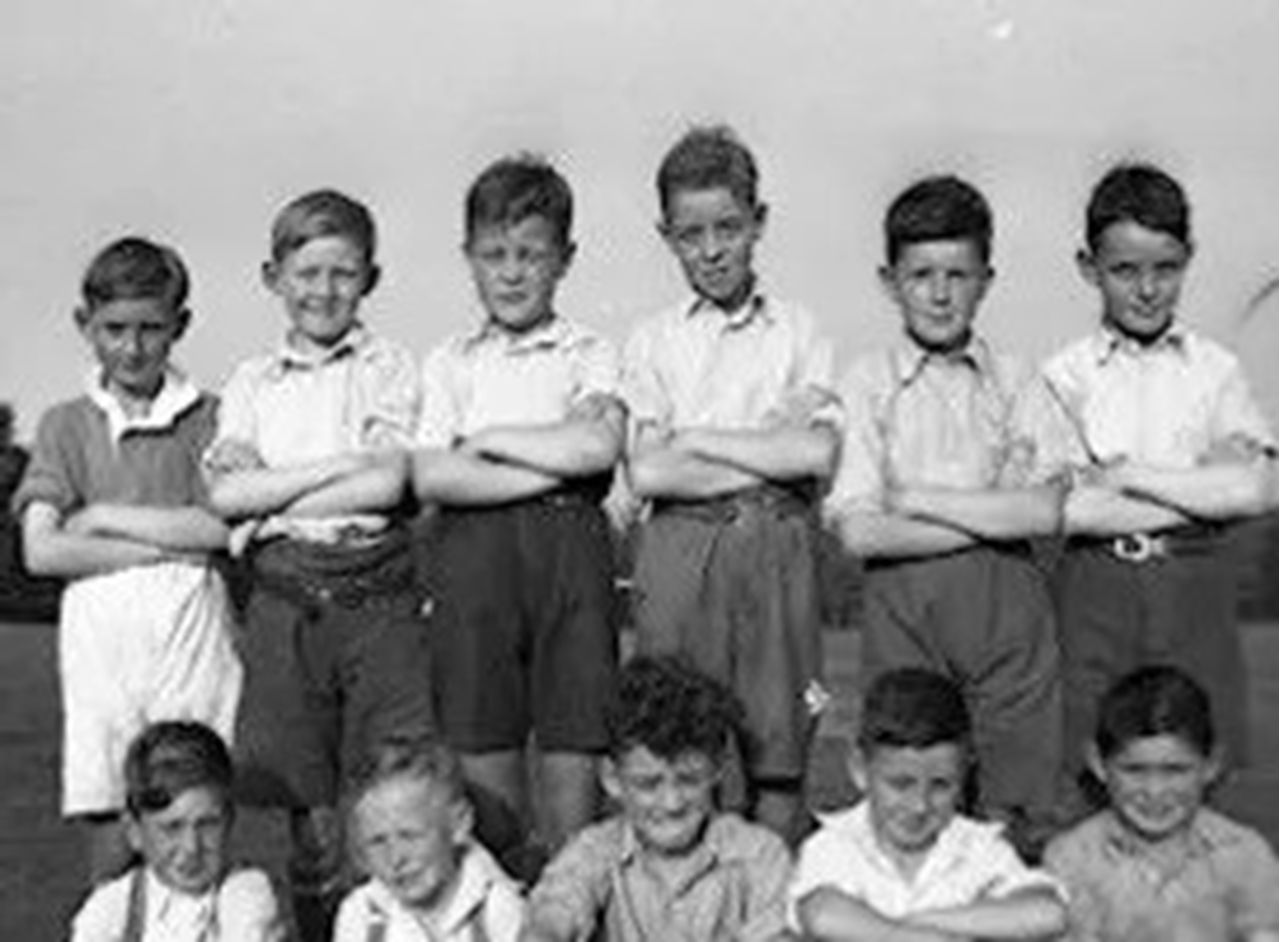 Mr Robert Loughran, a pupil at St Huberts from 1945 to 1951, who wrote the sporting memoir above, has also given his permission for the following report and photograph to be shown on our website. We thank him very much for his kind contributions. 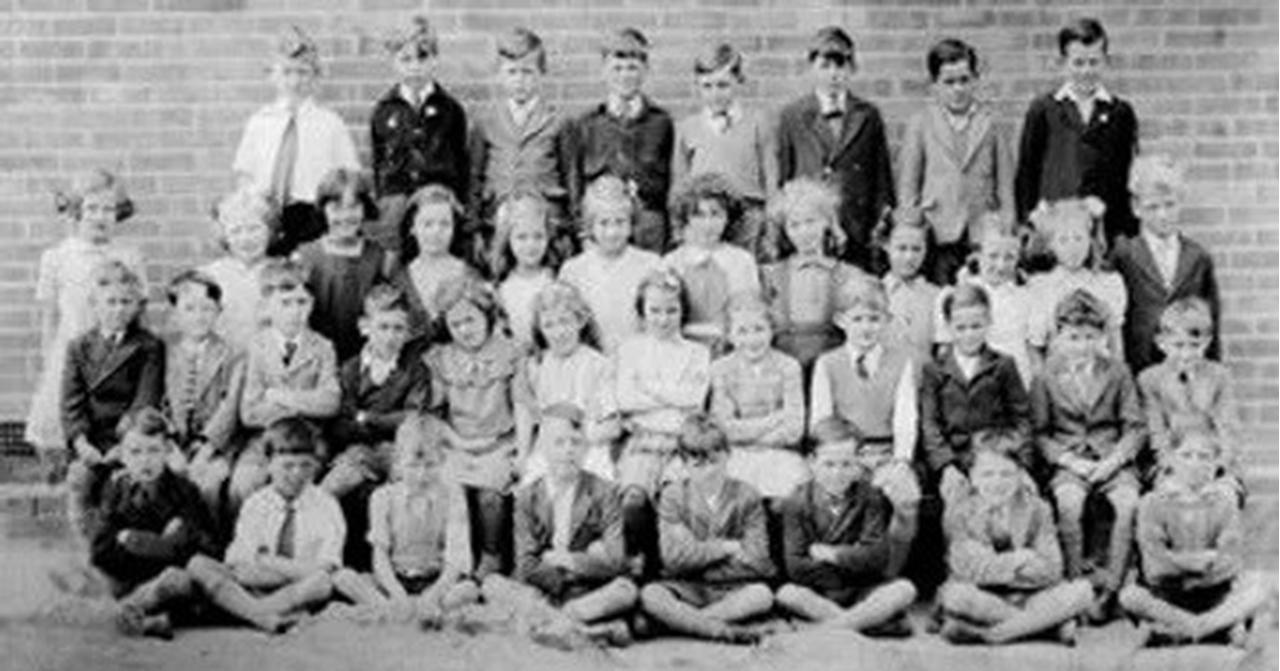 A class photo from 1948-49.
Mr Loughran is sitting on the far right, second row from the bottom. 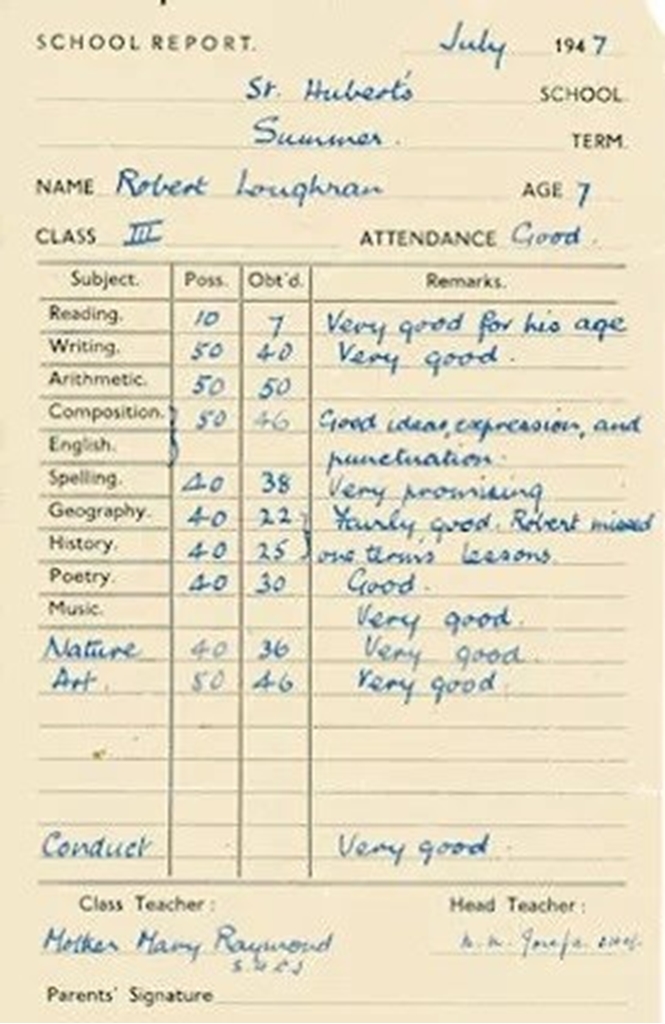 I remember Robert and his passion for sport. I remember playing cricket on the field between the school and the church with Robert's father bowling 'soft ones'. My hand eye co-ordination was never good especially when holding a cricket bat and I reember the ball hitting my head. Of course I have always blamed it on the roughness of the field.

He mentions Mother Mary Raymond who was quite the disciplinarian in some ways but remarkably generous in others. I remember the annual trips to Sutton Park and I remember the big water holding tank located on the field adjacent to the Church and Wolverhampton Rd. This was one of the emergency measures required in case we were bombed. I remember too the Air Raid drills and spending time in the Air Raid shelters that were under the gardens in the front of the school.

On your site there is a class photo showing Robert and I recognized myself immediately sitting in the center of the front row.

One of the other students I clearly remember was John Rose. John and I started school together and we lived on the same street (Barston Rd) so we would walk to school together John like Robert went on to St Phillips while I went to the Oratory. There used to be allotments too by the school fence at the side of the play ground. What a great start we had in our lives and what happy memories.

I started school at St Hubert’s in April 1943 just before my 4th birthday. The Headmistress at that time was Mother Josepha of the Holy Child convent in Edgbaston. My first teacher was Mrs England whose husband John was a paratrooper during the war and came to see us once in uniform.

John England resumed teaching after the war and taught for a while at Perry Beeches Junior School in Birmingham where my wife was a teacher for 37 years. He eventually became a headteacher at another Birmingham school and was a leading light in the N.U.T where he would most definitely be remembered. He also hosted a television programme for a short time called 'Paper Talk'.

During my time at St Hubert’s I was an altar boy when Father O’Doherty was Parish Priest. Also during that time, my sister Mavis, who is five years older, was Head Girl.

When the Wolverhampton Road was resurfaced during the war, they used German prisoners of war to work on it. The prisoners wore boiler suits with large white POW on their backs and would spend their breaks resting in the front garden of the school and we would talk to them.

When I was six years old, I remember the talk amongst the children on the playing field of a terrible place that had been found by the army in Germany. That place was called Belsen.

The final memory that I will bore you with is that when we were given any written work to do, we were always told that whatever else may appear on the paper. Three things must be there: a margin on the left with A.M.D.G. on the top of it and the date at the top right.

Find Us / Other Details

If you would like to speak to us about support for special educational needs, please feel free to contact our SEN Co-ordinator Lisa Heath: lisa.heath@st-huberts.sandwell.sch.uk

If you would like any parental help/support, or have any queries relating to workshops, attendance, school places, homelearning or much much more, then please feel free to contact us where we can provide parental support: 0121 422 2629

If you would like any paper copies of the website's information, please submit a request to the office and it will be dealt with in line with our GDPR policies and regulations. All paper copies are available to you free of charge.